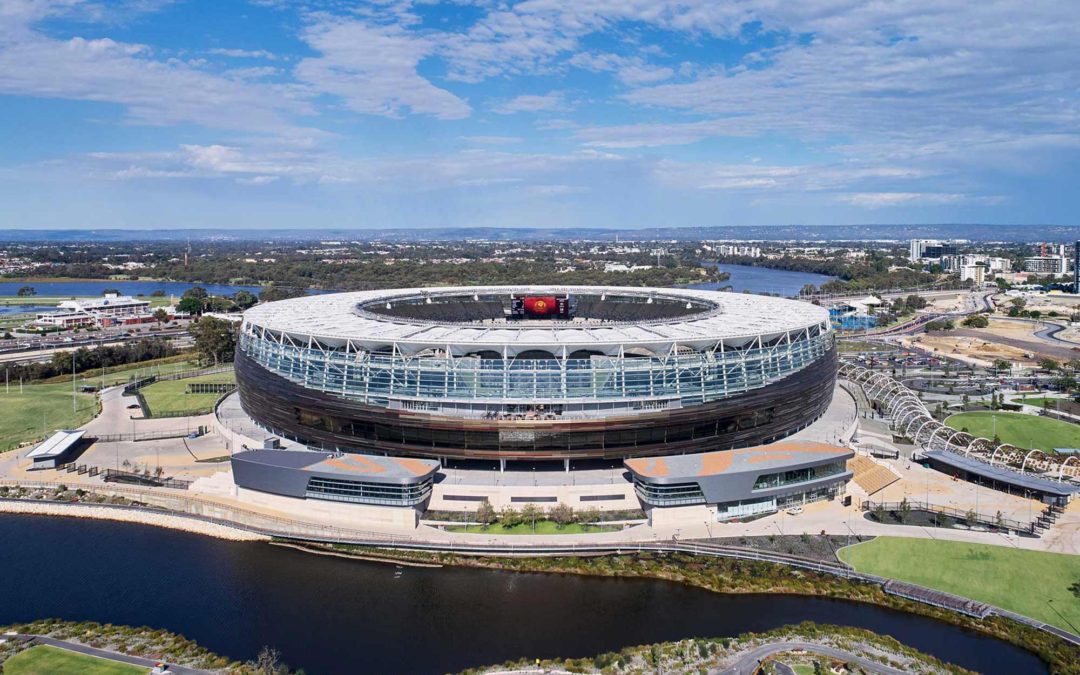 Famous for its majestic structure, exuberant ambience, and top-grade interior design, Optus Stadium in Perth is one of the world’s best architectural breakthroughs ever made. Located in the suburb of Burswood in Perth, Optus Stadium serves as a multi-purpose facility that hosts several of the most popular sports events in Australia, such as the Australian Football League (AFL), International Cricket Council (ICC) Championship, Rugby Championship, and many others. It’s not only a masterpiece in the area of sports, but in the areas of entertainment and the arts as well.

Known to many, Optus Stadium was hailed as the most beautiful stadium in the world at the 2019 Prix Versailles International Architecture Awards. Since then, this amphitheater has gained so much public attention, and has become sought-out both for locals and foreigners alike.

There are a couple of factors why this stadium is deemed important and why it stands out among the rest. Learn these things below:

Due to its worldwide exposure, Optus stadium has hosted world-class and large-scale sporting and entertainment events, hence enabling Western Australia to rake in over $105 million from interstate and foreign visitors staying there during those events. Additionally, there have been 8,600 people employed during the construction of Optus Stadium and related transport infrastructure, while 3,300 have been employed in its operations. With these numbers, it’s really safe to say that Optus Stadium is economically beneficial and is very helpful for a lot of people.

• It’s a reflection of both beauty and cultural heritage.

A tour in Optus Stadium is considerably a jaunt to a modern paradise. You’ll get the chance to take a peek at the beautifully-designed locker and coaches’ rooms, be in awe of the Perth city skyline from the stadium’s highest point, and be amazed by the wonderful views of the Swan River. Not only that, you’ll get to see some memorabilia showcasing Western Australia’s sports history. For a lot of tourists, that’s just completely awesome!

Considered as one of the most remarkable facilities in the world, Optus Stadium is not only an avenue for well-acclaimed sports events, but of international concerts and entertainment as well. America’s sweetheart Taylor Swift graced Optus Stadium with her Reputation Tour and “Swifties” could not get over it. Aside from Swift’s exceptional talent, what added much to the concert’s overall beauty was the high-spirited ambience the stadium was able to provide.

Also, the famous singer-songwriter Ed Sheeran has owned the biggest concert ever seen in Australia, gathering 60,000 “Sheerios” in Optus Stadium. Amazed by the state-of-the-art facilities and accommodation, Sheeran was quoted saying, “I’m so happy to be here in your new stadium. It’s mad to be playing somewhere this big. Regardless of what you might think, this is the first full stadium tour I have ever been on.”

• Its interior fit-out is exceptional.

Aside from its magnificent exteriors, Optus Stadium is also recognized for its first-rate interior build-up. Thanks to Cubic, your trusted partner in interior building and commercial fit out.

Cubic has provided quality interior services and packages to Optus Stadium such as the following: thermal soffit internal glazing, insulation, ceilings and partition, external kingspan cladding, CFC cladding including speedpanel, auto doors, mirrors, and entrance soffits feature ceilings. Following all environmental and safety standards, Cubic has made sure that Optus Stadium’s security is something that anyone can count on.

Cubic is committed to yield innovative and excellent interior fit-out solutions to their projects; anything substandard is basically not their thing. That’s simply how it works. Get in touch now!